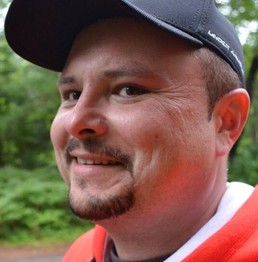 It is with broken hearts that we announce that on July 26, 2022, although sudden and unexpected, Peter Andrew Wrobel (born April 17, 1978) passed away peacefully in his sleep at his home in Acton, ON. Dearly loved husband of Christine Nicole Wrobel (née Dreise); beloved son of Andrew and Grace Wrobel (née Bogacka); elder brother to Anna Katharine Wrobel (Shady Alsayyad); son-in-law of Calvin and Anita Dreise; brother-in-law of Brandon (Karen) Dreise, Daniel (Amila) Dreise, and Joel (Salome) Dreise; and loving uncle of Brinley, Tevai, Julia, and Midori.

Peter was born in Tarnόw, Poland. He moved with his parents to Canada in 1984, and after a few moves settled in Mississauga, ON. He met his wife, lover, and best-friend Christine in 2009, and after dating for five years, married in 2014. They lived eight blissful years together in Acton, ON. Peter had a deep love for Christine. His tender attentiveness to her was clear to anybody who knew them together. He looked after her like any parent or sibling could ever ask for. Simple, everyday actions like leaving a coffee and a bagel or muffin for her on the stove every morning. Or making every lunch and dinner for her, which was never done out of obligation or duty.

The way Peter treated Christine was the way he did everything. He was passionate; anything Peter did, he did to the fullest. Called his parents at least once everyday, always cooked way more than was needed when cooking for others, and always gave way too many gifts to his nieces and nephew (much to their enjoyment). He could talk for hours about his favourite Toronto sports teams, and you could always tell how excited he was about something based on how loud he was talking. Pete was fiercely loyal to his family & friends, dependable in his workplace, and refreshingly honest and straightforward. He would do anything for those he cared about without question.

There is a big hole now once filled by his big heart, loud laughs, and strong hugs. Peter was truly loved by so many, and his larger-than-life presence is sorely missed. It was a joy and blessing to know Peter while he was with us, and it’s these memories that we will forever cherish.

If desired, donations to a charity of your choice would be appreciated by the family.